A slate surface is often the bread and butter of a turkey hunter’s pot call selection. It creates very realistic tones, and is easy for a beginner to use. Using a scotch brite pad, you can get the surface rough, allowing you to cluck and purr with ease! While it sounds good, and is easy to use, a slate isn’t going to be as loud as some of the other surfaces, and is prone to moisture and oils penetrating the surface, and changing the sound. The Primos Rare Breed Slate is a fantastic call, and is a staple in the slate offering.

If you want to reach out and touch a big ol’ longbeard, glass is a go to! It creates a high pitched sound that is great for hunting in the wind, or big open country. Glass has a very sharp pitch and is also great for pulling a gobble out of stubborn bird. The downfalls of glass is it becomes slick, and inoperable when wet and sometimes can be harder to get lower end quiet tones on. It also requires frequent resurfacing, because the surface has less friction than slate. The Power Crystal is a tried and true call, and is always in the vest of Team Primos.

Ceramic surface pot calls aren’t as popular as glass and slate but serve a great purpose. Ceramic offers a higher pitch than slate with the ability to get loud! Like slate it’s easy to work, and is great for low end calls. It is a porous surface like slate so you need to be sure it’s not getting oil from your hands on it. Frictionite is a ceramic surface used in the Hensanity, and Foggy Bottom lines, and both are turkey killers!

The Power Crystal Turkey Call is a slate style call with a glass surface. The combination of the glass surface and the internal sound board, allows the Power Crystal to produce loud, sharp, crisp turkey sounds. This is great for locating, but also for sounding like the lead hen of a flock.

Frictionite surfaces have been around for a long time. They are known to be very responsive and produce sharp, accurate sounds that you are accustomed to hearing in the turkey woods. It is a known trait that turkey hunters often feel the need to carry a multitude of calls into the woods. The frictionite surface is known to be louder than a slate surface, but more subtle than a glass surface.

Made from a CNC milled wooden pot, the Rare Breed Slate Turkey Call has a Pennsylvania Slate surface that is one of the most forgiving surfaces found in pot calls. The Rare Breed is designed to be able to use the entire surface of the call for distinct sounds. For deep, soft calling, position your striker towards the middle of the call. However, if loud yelping, cutting, or purring is what you need, simply sue the outer edges of the call.

Primos Hunting - Stream the Language. I'm Will Primos, and today I want to talk about turkey calls specifically a slate call or pot call as many people call it. Where did the pot call come from? Well, many many years ago what all the turkey call makers did is we took a flower pot, because it was the quickest already molded piece of plastic, and we would cut it off right about there and mount a piece of slate or glass or some other material on it. This would cause friction between a striker and the surface and that's why we ended up nicknaming in a pot call I still call them mainly slate calls no matter whether it has glass in it or crystal or some other type of ceramic to make the two surfaces be abrasive to each other. The slate call is a wonderful instrument, the big downside is once you call up that turkey you have to get rid of the striker and the slate style call and get your hands on your gun and get it on the turkey. So a lot of people start off with a slate call and finish with a mouth call but at any rate you simply are trying to make this surface make noise with a striker and the angle is what's so important. So if you are straight up and down you get no sound watch as I tilt it, as I tilt it and move it into a “J-C-J” shape or an egg shape never picking it up. It's a lot more to it but that's just so you'll know what you're looking at slate call and a striker. 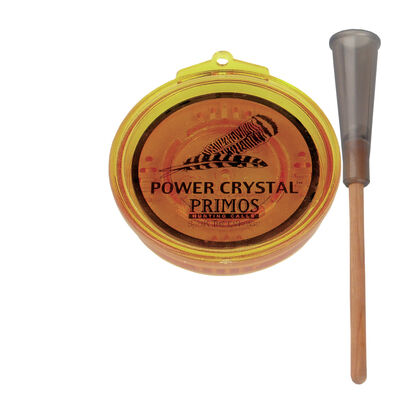 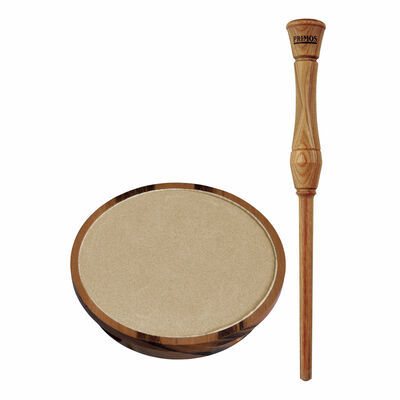 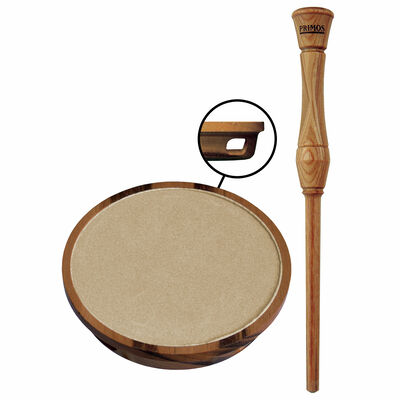 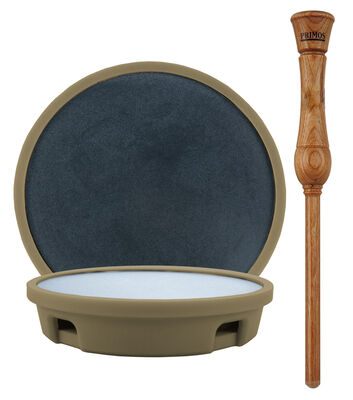